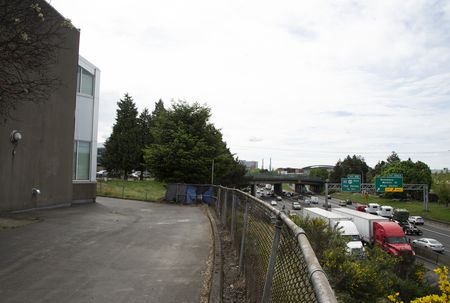 The back side of Harriett Tubman Middle School in Northeast Portland, which borders Interstate 5. April 30, 2021. Beth Nakamura/StaffThe Oregonian

Kotek’s bill, known as House Bill 3065, would allow Oregon to borrow as much as $600 million in the next few years to pay for projects to address what the state says are significant freeway bottlenecks in Clackamas County.

It also would fund the estimated $300 million to $400 million the Oregon Department of Transportation projects it needs to design and begin operating a tolling system that varies toll rates based on how congested the freeways are at any given time.

In addition to authorizing new short-term, the legislation would give the state greater flexibility on how to spend the $30 million a year lawmakers allocated for the Rose Quarter project, which will be available starting in 2022.

Kotek, a North Portland Democrat, on Tuesday briefed lawmakers on her newly amended bill, which was shaped in conjunction with a work group comprised of officials representing the state transportation agency, Metro, the Oregon Environmental Council plus tri-county officials and Portland transportation leaders.

If approved, the bill would allow construction to begin next year on the first phase of what could be a $700 million project at the Abernethy Bridge. That project, which would widen and seismically retrofit the structure spanning the Willamette River, was included in the 2017 transportation package but wasn’t funded. Kotek’s bill would also allow the Rose Quarter money to kickstart plans to widen I-5 and build a new Boone Bridge through Wilsonville. That project is estimated to cost as much as $550 million.

The mammoth transportation package set in motion the effort to charge all drivers on portions of I-5 and I-205. But four years later, it’s not clear how much consensus exists on how to pay for the tolling program or the I-205 bridge project. The specter of a ballot initiative to either restrict the state’s tolling plans or require monies be spent on certain priorities is also an unsettled factor.

Daniel Porter, the lead economist in the state transportation department, outlined a funding scheme that relies extensively on short-term debt predicated on future toll revenues to get the three freeway projects off the ground, while also progressively borrowing against $30 million a year in state gas tax revenue set aside under the transportation bills starting in 2024. Porter said the bureau needs gap funding to pay for these projects before toll revenue rolls in.

“Tolling is really the idea of how we’re going to pay for the rest of this,” he said of the projects, which could total upwards of $2.5 billion. A $150 million freeway widening project on Oregon 217 was partially funded through the transportation package and is also expected to be built with money allocated in Kotek’s bill.

Big questions loom. The state, for example, does not have an estimate for how much money it could collect via congestion pricing starting in late 2026 or early 2027.

The Rose Quarter project, once estimated to cost $450 million, is now projected to cost $715 million to $795 million. That estimate may understate the total costs, as ZGF Architects is studying how the state could build more robust interstate covers, a key request from elected officials in Portland and the nonprofit Albina Vision Trust. The nonprofit is a Black-led organization that has for years advocated reclaiming the historically Black neighborhood that was decimated by the freeway.

If the state decides to pursue substantial freeway covers that allow for additional housing or development, project costs could be significantly higher. The state still expects to break ground on the project in 2023, though a lawsuit filed by nonprofits and anti-freeway groups in April seeks to compel a more extensive environmental impact study that would delay the project for years.

Kotek told the Joint Committee on Transportation that her bill would give the state “nimbleness” to build all the projects and includes a stipulation that projects not yet fully designed take into account how freeway pricing would potentially reduce vehicle miles traveled and “the future capacity of the highway.”

“The world has changed since 2017 and we need to move with it,” she told the committee. The 2017 bill set the stage for congestion pricing but didn’t provide ways to pay for it.

“The reality is,” Kotek said of freeway pricing, “we’re not anywhere close to getting that done.”

It also appears Metro area leaders aren’t close to agreeing on the matter.

The latest iteration of House Bill 3065 stipulates Oregon is pursuing congestion pricing as a means to reduce traffic on Portland-area freeways and raise revenue to pay for freeway and other projects. It includes a provision that toll revenues may be used for multi-modal and transit projects to improve options for people who want to avoid paying the freeway charge but don’t have viable alternatives. State transportation officials couldn’t answer how much of the money would fund transit projects.

Metro Council President Lynn Peterson offered a full-throated endorsement of those provisions, saying Oregon would be “at the forefront” nationally of efforts to charge drivers a variable rate to use highways. " No community has implemented the comprehensive traffic demand system envisioned by the dash eight amendments,” she said, citing the latest iteration of Kotek’s bill. 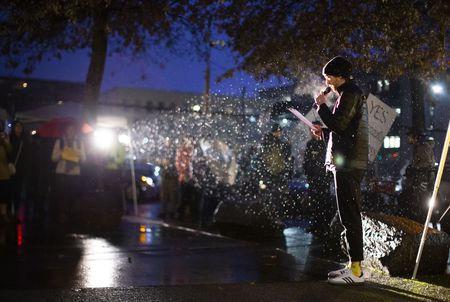 Portland Commissioner Jo Ann Hardesty, who oversees the city transportation bureau, similarly called it groundbreaking but expressed worry that highway expansion would take precedence over transit. “I know that we have much work to do,” she said.

Clackamas County Chair Tootie Smith said she supports widening I-205 and addressing the Abernethy Bridge but said Clackamas County’s board doesn’t support tolling. “We believe it will have a disproportionate and disparate effect on residents of Clackamas County,” she said, noting that I-205 tolls would arrive years before charges for those driving in Multnomah County. “We are opposed to that,” she said.

Wilsonville Mayor Julie Fitzgerald similarly supported the Boone Bridge project but said congestion pricing should “produce new improved facilities.” And tolls should be implemented simultaneously on I-205 and I-5.

TriMet officials told The Oregonian/OregonLive Monday that the agency had “not been in contact with the speaker’s office directly.” But the transit agency said it supported the bill, while noting that any funds generated for transit “can only be used for capital investments.”

“Additional operating funds may be necessary to serve increased ridership,” the agency said in an email.

The nearly two-hour public hearing also included a chorus of voices, including from younger metro residents, who said any investment in freeway widening is a vote for “climate arson.”

Adah Crandall, a freshman at Grant High School in Portland who attended Harriet Tubman Middle school which sits adjacent to I-5, told the committee supporting the bill would be climate action, but in the “complete wrong direction.”

“We are running out of time, and I am terrified,” she said. “How do you talk to your children about the climate dystopia you are leaving for them?”

One such group, Sunrise PDX, said it will continue to picket ODOT facilities and demands a moratorium on all freeway projects like those included in Kotek’s bill.

Joe Cortright, a Portland economist who has been a vocal critical of state freeway expansions for years, said the plan needs to put congestion pricing in place before any freeways are expanded.

He said passing Kotek’s bill would also be a huge financial gamble because the state doesn’t know how much toll revenue it will be able to generate and will go into debt with no assurances of getting out of it. “The system that we have already built and already invested in is adequate,” he said.

Tuesday’s hearing was noticeably bereft of voices from the trucking and automobile and driver advocate community.

AAA of Oregon and Idaho did not testify Tuesday, and Jana Jarvis, the head of the Oregon Trucking Association, declined to comment.

The state elected to keep the public hearing open and continue accepting testimony Thursday at the behest of Jarvis and those groups.

The speaker’s office confirmed the bill must be scheduled for a work session sometime this month by Friday or it will die this session. “We anticipate more technical changes,” a spokesperson confirmed Tuesday.

Note to readers: if you purchase something through one of our affiliate links we may earn a commission.