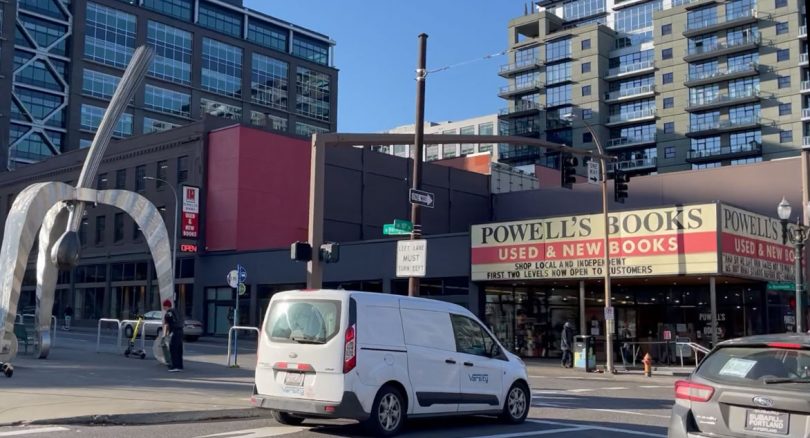 Portland’s most expensive neighborhood is on the opposite side of the Willamette River. Most likely, your hotel will be here, unless you are concerned about renting a room in a private house somewhere in the northeast. Here, in a relatively small area, there are many churches: Baptist, Presbyterian, Korean, Scientology, etc.

The centerpiece of Downtown’s social life is the huge Powell’s bookstore (1005 W Burnside St), which in itself says a lot about the city. Spanning four floors, Powell’s is about ten times the size of Moscow’s largest bookstores. Many rooms with shelves extending under the ceiling are divided alphabetically and thematically. There are new books, old books, used books, autographed books, as well as socks with funny inscriptions, T-shirts styled like bestseller covers, mugs and other nice little things. Wi-Fi, of course. Cafe and showroom. Several times a week, Powell’s hosts meetings with writers.

One of Portland’s most popular restaurants, Clyde Common (1014 SW Stark St) is just steps from Powell’s. Tables are booked in it a couple of days in advance, and most of the dishes are unusual variations on the theme of European cuisine, and, unlike many places with a similar claim in Moscow, Clyde Common is really very tasty. Rabbit roll with foie gras and carrots, steak with mozzarella and zucchini, lamb with blood sausage and tarragon pesto – each hot dish costs around $ 20. Once inside, you find yourself stunned by the rumble of conversations from other visitors – this is a strange acoustic effect of the room, and it takes some time to get used to it. One more detail: one of the local waiters is an exact copy of the actor Seth Rogen.

Street food (and cheaper than Clyde Common) food lovers will find plenty to do in Downtown, too. There are at least two “towns” with cafe-trailers: one at the intersection of SW 10th Ave and SW Alder, the other at the intersection of SW 3rd Ave and SW Washington. Here you can quickly and inexpensively grab hot American, Arabian, Indian, Turkish, and more recently Georgian food. The owners of the Kargi Gogo trailer are Americans, who spent more than a year on some business in Georgia and became so imbued with the local cuisine that they decided to continue working on it. They make khinkali, khachapuri, lobio and several other traditional dishes. The result is not that outstanding, but you can buy a bottle of cool Borjomi from them.

Shops in DOWNTOWN IS MUCH MORE EXPENSIVE THAN THE REST OF THE CITY shops in Portland. There are shopping malls that are common in any big city, and one-person shops selling the creations of Portland designers. Some of them are geared towards adorable and useless junk like paper wallets and solid log iPad holders, but there are some that are of serious interest, such as Bridge and Burn (1122 SW Morrison St), Lizard Lounge (1323 NW Irving St) , Poler (1300 W Burnside St) and Tanner Goods (1308 W Burnside St).

In downtown, there is the Living Rooms Theater, which shows author’s, including European films. This is a rare case for these places – a cinema where it is allowed to take drinks and food into the hall, however, the latter looks strange: the waitress, bent over three deaths so as not to obscure the screen, brings a tray in the middle of the session, after which you try in vain to wield a fork in the dark and with a knife (and as silently as possible, so as not to interfere with the random jingle of other spectators).