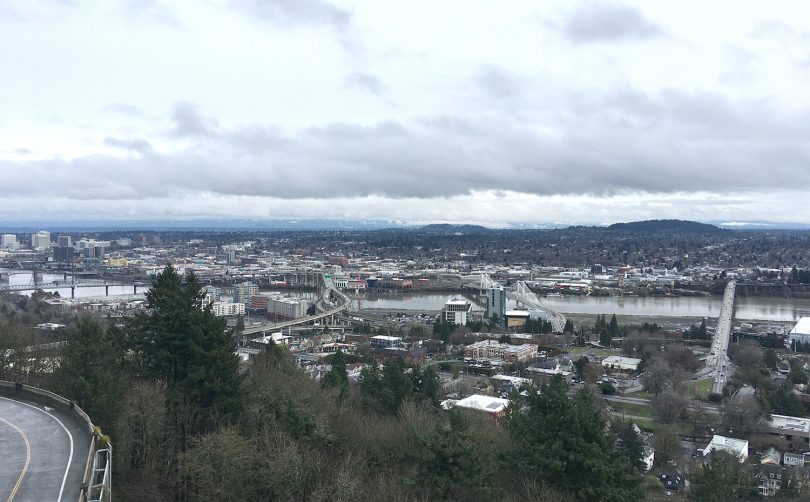 Jogging or cycling on the banks of the Willamette River, which runs through the center of the city, or walking in the woods that sway for 20 minutes by tram. Shop at the farmers market, where you’ll find plenty of fresh organic vegetables from suburban farms, and taste your favorite craft beer at more than 50 breweries in the city. In Portland, you can enjoy living in harmony with nature in such a style.

Attracted by such an attractive life, 40,000 to 80,000 people migrate to Portland every year. According to the US news magazine Atlantic, Portland has many talented young people who come to start a business, and the rate of young people starting a business is higher than in other cities.

With the help of these young people, the city’s GDP (gross domestic product) growth rate is about 23%, which is one of the highest in the United States. Supporting economic growth and lifestyle is the creation of an energy-saving city that is friendly to people and the environment. It is also a world leader in environmental cities, reducing CO2 emissions per capita by about 22% * 1 in 20 years.

Until the 1960s, Portland was one of the most common local cities on the premise of a motorized society. Housing development in the suburbs has progressed, urban areas have become hollow, and the living environment and security have deteriorated.

Oregon, which embarked on urban revitalization to get out of this situation, established the land use system “Urban Growth Boundary” in 1979. This is to curb the development that has spread outside the city. At the same time as preserving the agricultural land and forests near the city center, we decided to consolidate the urban functions in the center and aim for a “compact city” that can be walked to major places within 20 minutes.

And in order to popularize public transportation, which is more energy efficient than automobiles, we will develop next-generation trams and bus routes such as light trails and street cars. We have succeeded in increasing the number of public transportation users by 80% (2005: compared to 1990) * 2. Also, in the process of redevelopment, one block is limited to about 200 feet (about 61 m). By making it about half the size of a typical American city, it has become easier to move on foot.

In addition, the highways will be demolished to develop parks, bicycle lanes will be set up on the roads, and bicycles will be allowed to be brought into public transportation. We also focused on creating an environment where people can easily move and interact without relying on cars.

As a result of these measures, the use of automobiles has decreased dramatically. We were also able to significantly reduce the CO2 emitted from automobiles.

In order to promote a compact city that concentrates urban functions in the center, Portland promoted the construction of a high-rise complex building with a mixture of stores, offices, and residences. At that time, the city and residents were particular about the environmental performance of the buildings, and decided to make all the buildings related to the city “green buildings” that reduce the environmental load as much as possible and consider biodiversity. In addition, we have decided to introduce the global standard “LEED certification * 3” that certifies buildings with high energy-saving performance in consideration of the environment. The LEED certification strictly evaluates whether energy is saved, water resources are valued, and whether it contributes to the revitalization of the community. In Portland, it applies not only to commercial buildings but also to all buildings such as residential buildings.

A typical area where you can see the efforts well is the redevelopment area “Pearl District” in the northwestern part of the city. It used to be a rough warehouse district until the 1980s, but it has been transformed into a completely new town in about 10 years by renovating an old building into a complex building. It is now one of the most popular areas in the city with art galleries, restaurants, boutiques and art schools.

Within the area, the “Ecotrust Building” is well known as a symbol of the Pearl District. This building has won the most difficult rating “Gold” among the “LEED certification”. Reuse almost all construction waste to reduce energy consumption during construction as much as possible. In addition, measures have been taken to reduce energy consumption in all parts, such as effectively using the natural light that enters through the skylight instead of lighting, and purifying and insulating water by planting. These efforts and achievements at the Ecotrust Building are widely open to the public, and many people from all over the world are visiting as a model building for the environment and energy saving in Portland.

A community organization called the “Neighborhood Association (NA)” plays an important role in urban development in Portland. Even in the redevelopment of the Pearl District, which began in earnest in the latter half of the 1990s, an NA called the “Pearl District Neighborhood Association (PDNA)” was organized and functions as a conduit between citizens and the government.

The PDNA meeting is held every month to discuss in detail measures for vacant houses, the location of bus stops, and the color of the outer wall of the new complex. The discussion is open to the public. In addition, we are enhancing the appeal of the city by ourselves, such as holding graffiti removal events and providing garbage disposal support for art events that are held regularly in the city. A total of 95 such NAs are active in the city, and the sense of autonomy that “the city is created by ourselves” is widely rooted.

Portland is now attracting attention from all over the world as a successful example of urban regeneration. It may be that a city that attracts many people is created not only because of the hard aspects such as city planning, buildings and transportation policies, but also because of the creative consciousness of the people who live and the attitude of emphasizing the locality.