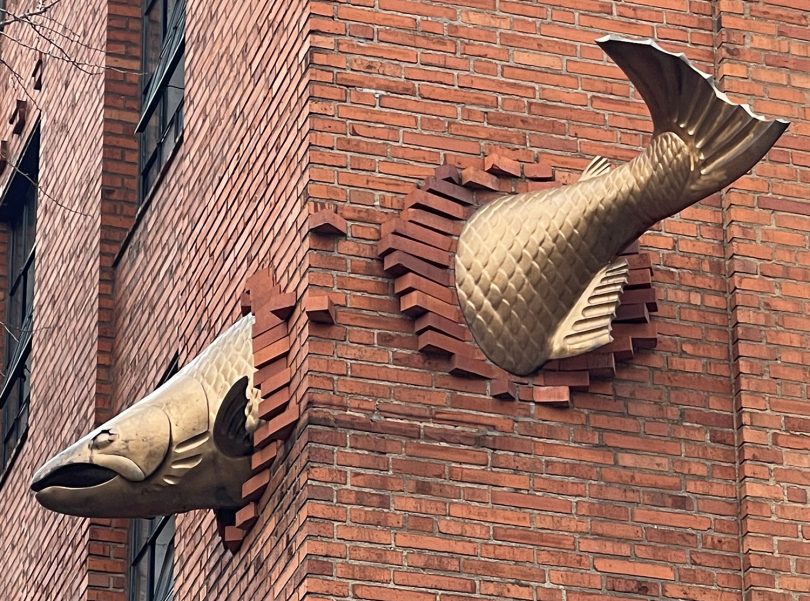 Portland The city of Portland is divided into approximately “seven areas” across the Willamette River, which runs through the center .

As the city is said to be a “compact city”, it is not so large and there is no problem with transportation, but when planning a “sightseeing” + “meal”.

Numerous restaurants are scattered throughout the Pearl district and downtown. Many travelers stay at hotels in the suburbs, but there are various restaurants and shops in the immediate vicinity of the hotel, so it is easy to access any of the shops.

A sandwich that represents the Pearl area. Anyway, volumey!

In the former industrial district of Pearl, there are many shops with refurbished factories. Among them, this TILT is one of the representative ones. Attention is focused on the interior and exterior, but the hamburgers and sandwiches are very delicious, and after all , the amount of potions is insane! !! The feature is. In addition, it is served on an aluminum plate as if it were carrying machine parts.

Pies are also recommended for those who have no eyes for sweets! If you can’t eat it, you can put it in a doggy bag and take it home to eat at the hotel!

Craft beer and hamburgers with a brewery

The pub restaurant and back in the brewery was founded in 1988, it features a brewery hoof it is always a lot of people in the shop were. If you like beer or come to the store with more than one person, ask for a sampler of 6 types of beer and enjoy the difference in taste and aroma!

The food is mainly American, and hamburgers and sandwiches are popular. In particular, some hamburgers use unusual patties (hamburgers made with “bison” or “venison” meat ), so please try the addictive taste that is hard to eat in Japan! !! Please note that it is only open from Thursday to Sunday !

Let’s enjoy life with beer together! !!

The brewery was born in Oregon in 2006, but is now run by a company with the momentum to deliver beer to other states. There are 10 types of “Beer Flight” in the sampler, and you can enjoy beer with various tastes. From strong hop aromas to fruity and chocolate flavors, I feel the young power that can be seen as trying to expand the possibilities of beer without being bound by preconceived ideas.

The store is located on the edge of the Pearl district near the Northwest, but the upstairs seats are like a beer garden, so on a clear day you can enjoy a beer from the most pleasant and bright day. We also actively hold events related to the outdoors, and it is a brewery that shines like Portland, which proposes a lifestyle with beer .

There is no doubt that you will meet beer at The American cuisine such as BBQ ribs, steak, nachos with blue cheese sauce and steak, hamburger, mac and cheese! It is a popular shop from Portlander.

A very popular restaurant of a famous local chef. There is no doubt that you will be satisfied with the atmosphere, food, and high cost performance.

Head south down the Pearl district and cross West Burnside St. to enter the downtown area. In the area where Ace Hotel, which is famous for magazines in Japan, is located, there are many other famous shops, and it is the busiest area in Portland.

It is no exaggeration to say that this is the most popular shop in the area. People waiting to enter the store are always in line at dinner .

It is one of the “TORO BRAVO” restaurants that develop restaurants around Portland . The interior and exterior, the casualness of the staff’s service and the fashionable balance are exquisite, and the food is delicious while being excellent at cospa. It is a recommended restaurant that is steadfastly popular due to its good location.

You can enter it relatively quickly at the time of brunch, but when you go to the night, be sure to stop by the shop in advance (after 2:00 pm when the brunch is served) and fill in the reservation list from 5:30 pm It would be better to go around other sightseeing. One of Portland’s leading casual restaurants.

A cute little restaurant created by a chef who trained in San Francisco, New York, Boston, and France, who fell in love with the city of Portland.

Maybe there are many Japanese travelers who want to eat “gentle food that doesn’t surprise their stomachs” when they come to the United States. This shop is perfect for such occasions.

From sweets to light meals based on French cuisine, you can enjoy colorful meals using local ingredients. Drinks served by Nanbu Tekki are also soothing for Japanese people. It is one of the recommended shops to visit when traveling in Portland with a couple or a couple.