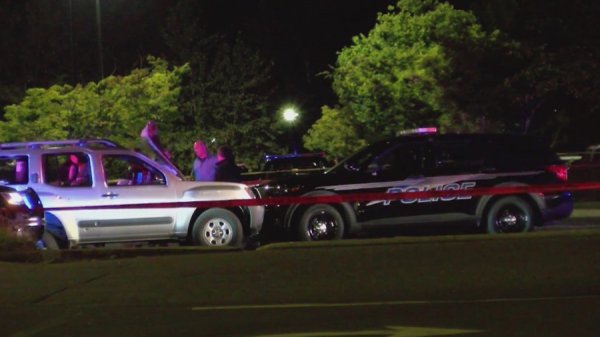 Suspect wounded, later taken into custody after another gun battle in Salem

KEIZER, Ore. (KOIN) — Anthony Divine and his friends were outside their apartments in Keizer Wednesday evening when they saw several police units swarm the parking lot of an animal hospital next door. The 19-year-old said there were several kids playing outside and his first instinct was to get them to safety.

“My main priority was to get all the kids inside and then I was going to head inside,” Divine told KOIN 6 News. “But then after I heard a couple of rounds I just started recording.”

In a 64-second video he shared with KOIN 6 News, the sights and sounds of a gun battle are clearly seen and heard at the corner of a busy intersection, River Road and Dearborn Avenue.

“I couldn’t believe it at first,” he said.

Neither could his mother, Angela Roman.

“I answered the phone and it was the neighbor and my first instinct was, ‘Are the kids OK?’” Roman said. “And she said, ‘Yes, the kids are OK but I need you to know there was a full shootout here.”

She said that’s all that raced through her mind.

“My kids like to ride scooters (in that parking lot) and it’s really smooth there,” she said. “When the business is all closed at 5 around her, the whole parking lot is taken over by all these children that live here in this community, tucked back in here.”

At 8:40 p.m. on Wednesday, Keizer police responded to reports of a suspicious vehicle behind a business at the corner of River Road and Dearborn Road. When officers arrived, they confronted two adult men near the car, which was determined to be stolen.

Once officers approached, one of the men exchanged shots with multiple officers. He then fled the scene in the stolen car. Officials say the other man stayed on the scene and was cooperative.

Keizer police were involved in an officer-involved shooting, pursuit and hit-and-run crash around 8:40 p.m. Wednesday, July 28, 2021.

The fleeing suspect headed south on River Road. As he roared through the River Road and Cummings Lane intersection, the driver struck and killed a pedestrian who was crossing the street.

Not long after, police from both Keizer and Salem stopped the suspect near Cherry Avenue and Salem Parkway. After a standoff, the man surrended. He was then taken to the hospital for treatment of multiple gunshot wounds.

The name of the suspect has not been released. Nor have the names of the pedestrian killed nor the 6 Keizer officers involved in the shootout.

As the shootout was still going on, Divine kept taking cell phone video. The suspect took out a parking sign and trash can as he plowed through the bushes to get away. Both Divine and Roman said bullets were flying in all directions.

Bullets shattered the window at the animal clinic. KOIN 6 News spotted bullet holes in a business across the street.

“You can tell he was shooting at the law enforcement and then afterwards looking at the crime scene, I mean, there’s multiple bullet holes that are in the ground that are lodged so far in there they can’t get them out,” Roman said. “The windows of the dentist office from where his vehicle was, he was just shooting out to the left at that point. He wasn’t even shooting at the cops behind him.”

There was a second shootout in a Home Depot parking lot in Salem where the suspect was eventually taken into custody.

The Oregon State Police are now investigating this entire incident. They declined to provide any more information at this time.