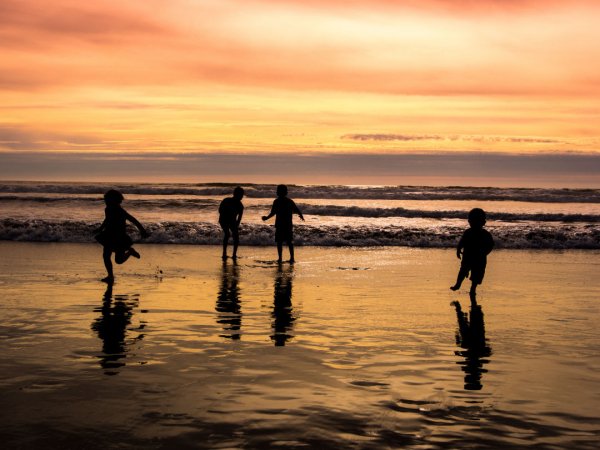 When the Oregon Health Authority shared an infographic last weekend asking people to try a “staycation” for spring break—with suggestions for activities such as taking a walk, gardening, and finding something good to watch on TV with other members of your household—there was a certain sense of déjà vu.

A year ago, it was on Spring Break Eve, Friday, March 20, that Gov. Kate Brown asked Oregonians to “stay home, stay healthy.” The next day, some coastal towns and counties shut down short-term lodging and issued orders for nonresidents to vacate. The day after that, Oregon State Parks announced it was closing its campgrounds.

The city of Warrenton, home to Fort Stevens State Park, made an emergency declaration based on the influx of traffic coming to the coast. “You gotta go,” said Mayor Henry Balensifer to Airbnb vacationers and temporary campers in a Facebook Live video March 21, 2000.

This year, though, campgrounds and hotels are open (good luck getting a coastal yurt!), and a very nonscientific sampling of Portlanders’ travel plans (based on the chatter I overhear via my children’s online schooling) suggests plenty of people are ignoring the Oregon Health Authority’s staycation plea. And they’re also considering a trip radius well beyond some of the limits that have been used over the past year, like a trip with no bathroom stops, or one that uses just a single tank of gas.

And Balensifer has a different tone. Sure, he’s worried about a workforce shortage, about local businesses that are struggling (this includes fine dining, he says, but local breakfast and pizza places seem to be bustling), about people who are worn down and run ragged. But with Clatsop County now in the “lower risk” category for coronavirus spread and the initial shock of last March well in the past, coastal communities aren’t anticipating ordering anyone to go home.

“Nothing’s going to be able to compare to a 50-mile line of cars … I don’t know if there are pictures, but it was to Vernonia,” Balensifer said this week of the coast-bound traffic backup a year ago that prompted Warrenton’s emergency declaration. As the year wore on, he says, “Transient lodging tax revenues declined because we took a very, very slow and staid approach [to reopening in the north part of Clatsop County]. This year, transient lodging tax revenue will be higher because the restrictions aren’t in place. Would I call it back to normal? I don’t think I would say that.”

Things aren’t quite back to normal at Portland International Airport, either. During spring break 2020 the Port of Portland announced the number of travelers expected to pass through PDX was down 90 percent compared to the year before, with just 3,000–5,000 daily passengers. For spring break 2021, the Port is anticipating more than 25,000 passengers most days, or just under 50 percent of 2019 numbers. A pre-spring-break Port news release encourages travelers to review airport policies “since it may be the first time many have flown in a while.”

On the coast, Balensifer encourages travelers to discover Warrenton’s hidden gems, from Clatsop County’s only off-leash dog park (Carruthers Park on the Columbia River) to its many waterfront hiking opportunities— Fort Stevens isn’t the only place where there’s trails,” he says. The kayak launch at downtown’s Skipanon River Park is an easy place to keep your distance, too. “Spring break is a beautiful time of year. The daffodils are starting to pop up, and the Skipanon River in that area is just afire with daffodils,” he says. “I don’t know of any other place that you can go and see everything from wood ducks and bald eagles and kestrels and northern harriers to elk, right on that little strip. And nobody’s usually there.”