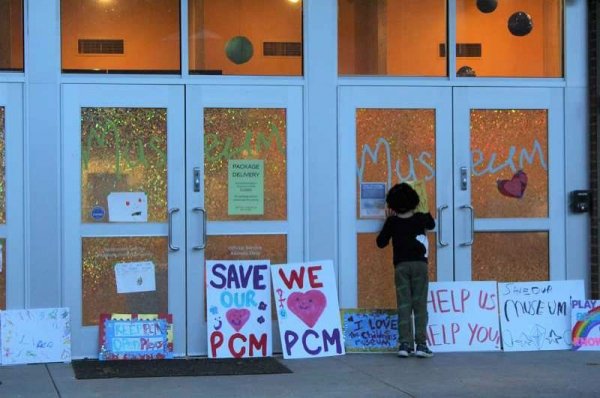 On a sunny afternoon in late March, parents and small children gathered in front of the Portland Children's Museum. But the doors remained locked.

A rally to save the Children's Museum and conjoining Opal School saw hand-decorated signs, flowers and mothers whose eyes reflected disappointment.

The organization announced March 25 that both the Children's Museum and adjoining Opal School would close this June.

In a public statement, the organization's leadership cited state-mandated coronavirus shutdowns that led to "devastating attendance and revenue losses."

"This was an incredibly difficult decision for the board. We've all experienced so many wonderful memories at the Museum with our loved ones, and we are forever grateful to the vibrant community of play that the Museum and Opal School have cultivated during these last 75 years," said David Peterson, board chair of the museum. "Its lasting impact will live on through the creativity of countless families, children, educators, artists and musicians who called Portland Children's Museum and Opal School their second home."

The museum operated in conjunction with the Opal School, a charter school sponsored by Portland Public Schools that took tuition for its preschool program.

Reopening the museum, Peterson said, "would result in an insurmountable financial deficit."

The board considered other options such as a mobile museum and enhanced digital offerings, but ultimately decided on closing the beloved museum and school.

The announcement said the board didn't know when families would be comfortable coming back to the hands-on museum.

This year is the museum's 75th anniversary and the Opal School's 20th year. Prior to the pandemic, the museum averaged about 250,000 visitors annually.

The abrupt announcement of the closures came as a shock. Museum members said even with regular newsletters from the organization, there was no indication of the impending shutdown.

"Over the last year, the Board remained publicly silent while the museum floundered," Elisabeth Utas, part of an informal group rallying to try to restore funding for the museum and school, said in a statement released to media. "Had they reached out for community support, they would have found a large contingent of parents, grandparents, and supporters of the museum's vision who would have worked tirelessly to keep this institution afloat. Now, the museum board is refusing to provide any information to the public regarding how the Portland Children’s Museum arrived at this point, what financial contribution they would need to remain open, and what, if anything, can be done to prevent these closures."

Utas noted by phone that she and other parents have reached out to state lawmakers and asked for input from Portland Mayor Ted Wheeler.

"We have been working with many state representatives that are supportive of our efforts as well," Utas said, but noted they can't do much without the museum board's blessing.

State Rep. Lisa Reynolds, whose district covers much of Southwest Portland, said she’s met with museum officials, but sees no solution in sight.

“I was so disappointed by the announcement of PCM’s closure,” Reynolds said. “I’ve met with Board members and the ‘interim’ director, Jani Iverson, and I’ve heard loud and clear – there is nothing to save. The board repeatedly refuses to name a ‘price’ or accept financial assistance. They have no capacity nor interest in reopening the museum.”

Reynolds said the community may need to start from scratch and “reimagine a new play-centered space for children.” 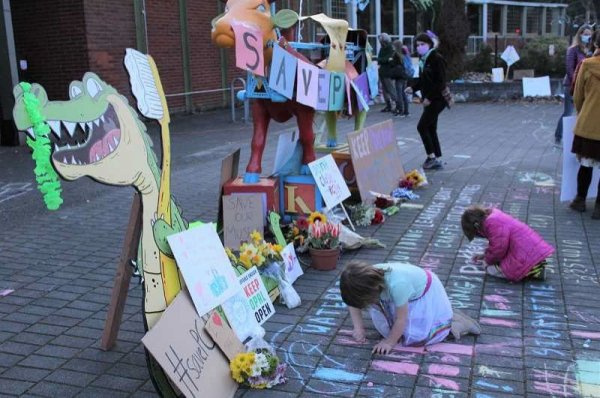 A GoFundMe crowdfunding effort was launched to hire an attorney, bringing in about $1,730 of its $5,000 goal by April 22.

It's unclear exactly how much would be needed to revive the museum. The nonprofit organization's latest audit statements indicate the museum operations alone cost $2.2 million during the financial year that ended June 2020. The Opal School cost about $925,600 to run and expenses for all operations totaled $4.5 million. In 2020, the organization received nearly $552,000 via a federal Paycheck Protection Program loan.

Laura Huerta Migas, executive director for the Association of Children's Museums, noted the decline of similar museums across the country.

"We are heartbroken by the closure of Portland Children's Museum, a longstanding member of the Association of Children's Museums and a leader in our field," Migas said in the statement released by PCM. "Sadly, the museum is not alone in facing unprecedented operational distress as a result of the pandemic. Children's museums across the country are reporting average losses of more than 70% of the income they had received in years past, and relief from public sources has not been adequate to relieve the impacts of the pandemic on cultural institutions."

Despite disinterest from museum board members, parents and supporters continue to brainstorm solutions, while asking for greater transparency into the assets, costs and decision making of the board of directors.

Brianna Harris, a mother of twins, has been bringing her children to the museum for years.

“We’ve been bringing them to the children’s museum since they were born,” Harris said, as she watched her kids write messages in sidewalk chalk in front of the museum’s entry. “They have a developmental area for babies. As they got older, they explored more and more of the museum. The value it provides them as they’re growing is unrivaled. I cannot imagine that Portland would let this institution go.”

Emily Hill said she was excited at the energy and turnout during the rally in March.

Hill said she wants to see the community and board of directors find a way to fund the charter school, then the museum. Despite the rallies and demands for answers from the community, the museum and school haven't given any indication that the decision is likely to be reversed.