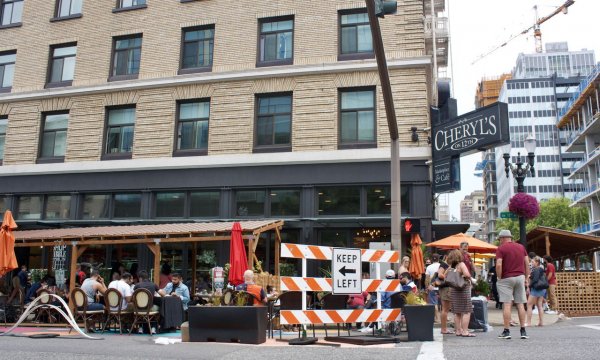 Pearl District brunch spots were full of customers both indoors and outdoors on the morning of July 31, 2021. COVID-19 cases have increased in Oregon and nationwide with the delta variant. April Rubin/Staff

Ellen West taught a class on adapting to change. Now she’s using her own lessons to cope with ever-changing COVID-19 projections and regulations.

The Portland State University business professor said she never stopped wearing her mask indoors, despite Oregon officials lifting the state’s mask mandate in late June. She’s among those continuing to mask up, given the increasing prevalence of the delta variant.

Oregon surpassed 1,000 daily coronavirus cases Friday for the third time this week — a surge that is expected to worsen in coming weeks. Case rates and hospitalizations have increased nationwide.

Kristi Yuthas, also a Portland State professor, said she wishes the mask mandate was never lifted in Oregon. Yuthas and West wore masks around their necks while walking together Saturday morning in the Pearl District, keeping their face coverings handy in case they stepped indoors.

“I’m very nervous about it all over again,” Yuthas said of COVID-19.

Oregon lifted its indoor mask mandate June 30 after about a year. But the state this week recommended all Oregonians wear masks in public indoor spaces, in response to rapidly spreading infections that the Oregon Health Authority has attributed to the extremely contagious delta variant.

Gov. Kate Brown said Friday that Oregon state workers and anyone in a state facility must wear a mask. The Health Authority and the Department of Education also announced Thursday that students, teachers, staff, volunteers and contractors in K-12 schools will be required to wear masks in summer programs and during the upcoming school year.

Meanwhile, the state has left it to counties to decide whether to require masks or other measures on their own — something local officials have said they are unlikely to do.

Frequent changes in Centers for Disease Control and Prevention guidance have upset Jeremy Sulzmann, who grew up in Oregon and lives in California. He said he’s done his part to protect himself and others by getting vaccinated.

“It’s like you’re left to your own devices,” said Sulzmann, who was visiting Portland with a friend from abroad.

Pearl District brunch spots were full of customers both indoors and outdoors Saturday morning. People walking on sidewalks throughout the bustling district were mostly maskless and in their own groups, separate from others.

Matt Moed, who wore a mask while waiting outside a salon for a haircut appointment, said he never stopped masking up because he feels more comfortable knowing he’s protected.

As the mother of young kids, Marisa Swartz said she’s apprehensive about the school year. She and her family were visiting Portland from Oakland, California, heading to Powell’s City of Books as part of a trip planned before the resurgence in cases.

Swartz said she’s disappointed because she thinks the country’s emergence from the pandemic is regressing — just after she was vaccinated and beginning to feel a return to normalcy.

Note to readers: if you purchase something through one of our affiliate links we may earn a commission.